Few Hikers Do the Pacific Northwest Trail. Should It Stay That Way?

Montana’s Yaak Valley was one of the most remote places Emma Vigers had ever set foot. Tucked into the corner of the Idaho state line and the Canadian Border, this heavily forested region offered the type of solitude Vigers had been looking for in a thru-hike. She was just a few weeks into her trek along the 1,200-mile Pacific Northwest Trail, which connects the Continental Divide in Montana to Washington’s Olympic Coast. At dusk, Vigers and her hiking partner were plodding uphill toward a mountain summit, when they noticed a large set of grizzly paw prints underfoot. Reluctant to continue walking, they decided to stop and make camp. Vigers would spend the remainder of the evening wondering if they truly were alone.

Thru-hikers like Vigers should certainly be bear aware on the PNT, but some say it’s the grizzlies who are most at risk. A local conservation group known as The Yaak Valley Forest Council (YVFC), claims thru-hiker traffic threatens the area’s small, isolated population of 25 grizzlies.

“We don’t have any bears left to spare,” says Rick Bass, a nature writer and founding member of the YVFC. Bass has been advocating for the Yaak Valley for decades, even writing a book that speaks to the solitude and vulnerability of this remote region. “Being a place so far off the map, nobody knows to even protect it,” he says.

Only about 60 to 70 people currently attempt to thru-hike the PNT each year, but activists worry the trail will experience the type of growth that has plagued other popular routes. Some long-distance trails like the Arizona Trail and Pacific Crest Trail have seen over a 90 percent increase in thru-hikers in the last decade. Upwards of 3,000 people attempted to hike the Appalachian Trail this year. According to the YVFC, numbers like this would have a devastating effect on the grizzlies.

“With our very low population of breeding age females, you lose one bear and you go past the tipping point for recovery,” Bass says.

The Yaak bears are part of a larger Grizzly Bear Recovery Zone in the Cabinet Mountains established by the U.S. Fish & Wildlife Service. Unlike other zones, these bears don’t have access to large swaths of designated wilderness or the protections offered by a National Park. Instead, the region experiences large timber operations and other extractive industries that impinge on bear habitat.

“We’ve got a ways to go to recovering this population,” says Wayne Kasworm, a bear biologist with the U.S. Fish & Wildlife Service. Kasworm has worked with the Cabinet-Yaak bears since 1983. To boost the population, Kasworm’s team has transplanted nearly two dozen bears into the zone, bringing the total up to 50 or 60. The efforts have helped, but the headcount is still substantially short of the 100 individuals necessary for full recovery.

While the effects of hiking—and outdoor recreation as a whole—on wildlife is still a growing field of research, many studies have identified negative impacts on a variety of species. One tangible example is the recent news that a herd of elk near Vail, Colorado that once numbered over 1,000 now comprises just 53. Scientists blame the surge of hikers, mountain bikers, backcountry skiers, and ATV users in the area.

Grizzly bears have also proven to be vulnerable to the effects of recreation. Biologists have observed them either avoiding an area because of human activity or fleeing it altogether. The resulting displacement can force the bears into lower quality habitats with less available food, possibly affecting reproduction and survival rates.

“Sheer numbers of people in bear habitat can basically push bears off a trail,” Kasworm says. 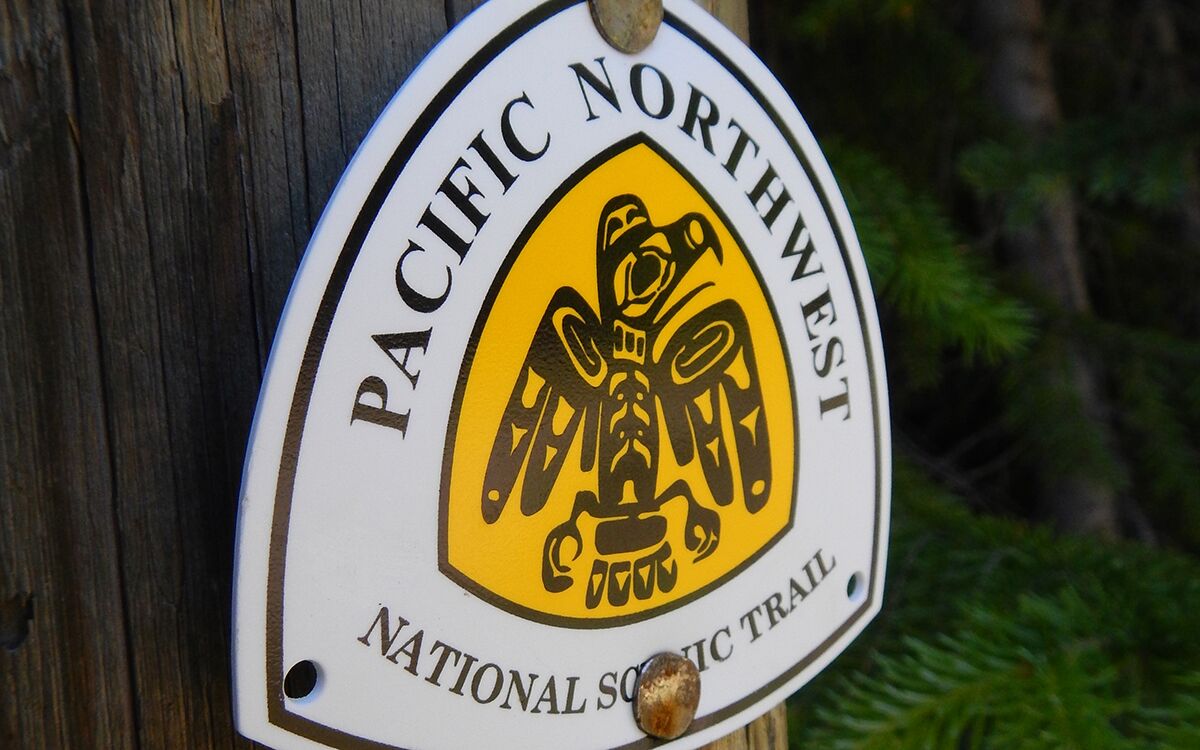 Not everyone believes a long-distance trail will put the Yaak grizzlies in danger. Jeff Kish, the Executive Director of the Pacific Northwest Trail Association (PNTA), says there isn’t enough definitive evidence to support the notion that hiking has a negative impact on bears. He noted that the same study cited above also listed potential benefits of outdoor recreation in bear habitat—primarily heightened awareness of conservation issues.

The PNT currently doesn’t see much traffic, in part because of the exceptional ruggedness of the terrain and its relatively new status as a National Scenic Trail, which it was granted in 2009. Advocates argue it’s also possible the trail will remain lightly used because of a limit on the number of backcountry permits issued by Glacier National Park—where most thru-hikers start the trail. Kish says that could create a cap of sorts.

When contacted, representatives at Glacier National Park said they did not have records available for the number of permits issued for campsites along the PNT. In theory, though, up to 40 thru-hikers a day could start from the park based on the capacity of the campsites on the trail, which could translate into as many as 1,200 hikers annually. And of course, a limit on permits doesn’t account for section-hikers, or anyone who bypasses the park.

While no one can say with certainty whether traffic on the PNT will increase or by how much, the number of Americans thru-hiking and participating in outdoor recreation as a whole is on the rise, putting significant strain on some areas. And it’s not just wildlife that’s affected.

“The impacts to soil I think are the most serious ecologically,” explains Jeff Marion, a recreation ecologist with the U.S. Geological Survey. “When you lose soil off a trail it’s gone forever.”

Marion was hired by the National Park Service to study the impacts of visitor use on the Appalachian Trail (AT). He spent three years with a team of researchers analyzing sections of the trail from Georgia to Maine. Their efforts revealed significant erosion issues. By Marion’s estimation, the AT has lost nearly 100,000 square yards—or 7,980 dump trucks worth—of soil.

The results confirmed what Marion had long suspected. He started hiking the AT in 1972, ticking off sections year after year, before finally finishing in 2015. During that time, he noticed increased erosion, trampling, and of course, more people. However, when he brought up the issue of soil loss, other hikers rarely believed him.

“They’d argue, but now we have data that proves it,” Marion says.

The AT was admittedly never intended for today’s level of traffic, nor was it constructed using modern trail building methodologies. Though improvements have been made, the study reveals that over half of the trail has either a poor or very poor sustainability rating. And while that is a concern, research reveals that camping is the bigger problem.

It’s not uncommon to find sprawling campgrounds along the AT. Marion’s team observed over a hundred campers at the Hawk Mountain Shelter in Georgia. Many of these “megasites,” as they’re dubbed in the resulting report, are heavily used every night for a month or more, causing serious erosion issues.

Despite the challenges, Marion believes the AT and other long-distance trails can sustain a growing number of hikers. “Even though I study visitor impacts for a living, I’m still very optimistic about being able to provide increasing opportunities for visitors to enjoy these amazing natural areas that we have,” he says, adding that it will take further research, good land management initiatives, and, inevitably, more funding.

The concept for the PNT originated in the 1970s, but was stalled in 1980 when a joint U.S. Forest Service and National Park Service report advised against it. The decision was due in part to financial cost and “significant adverse environmental impacts” on grizzly bears and fragile high-elevation environments. 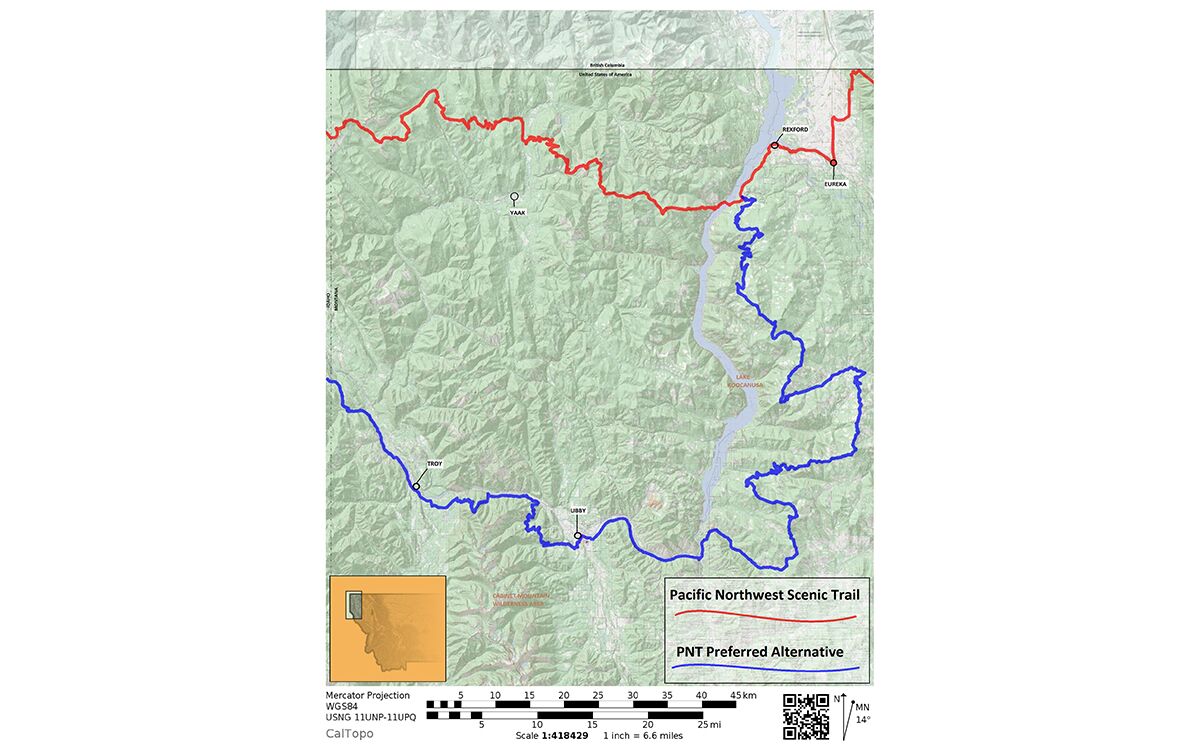 Over the next 30 years, advocates continued to push for the PNT to be listed as a National Scenic Trail, but it wasn’t until a few years after it was listed in 2009  that Bass and other grizzly advocates in the Yaak Valley became aware of the trail’s new designation. In 2018, the YVFC commissioned a private study to examine the potential impacts of thru-hikers in the Yaak Valley. It came to the same conclusion as the 1980 report—that thru-hiker traffic will have a detrimental impact on grizzlies. Careful to allow that they aren’t opposed to hikers or the trail itself, Bass and the YVFC are urging the Forest Service and the PNTA to find an alternate route.

For their part, the PNTA says the proposed re-route raises concerns of its own and does little to alleviate any risk to the local grizzly population.

Jogging south from the current route, the proposed trail largely follows the Kootenai River and highway, passing through the towns of Troy and Libby. Because much of it is along paved roads, the reroute would require extensive trail building efforts that, according to Kish, would be too costly, expensive, and time-consuming. It also bisects the Cabinet Mountains and Yaak grizzly populations, which, Kasworm worries, could potentially complicate migration between the two areas.

While Congress has sole authority over major relocations to the trail, the Secretary of Agriculture is authorized to make minor reroutes. According to the National Scenic Trails Act, the Forest Service is required to release a comprehensive management plan for any proposed trail within two years. It has yet to do so for the PNT. On August 23, after years of frustration, the YVFC filed suit against the Forest Service.

“The agency is promoting the northern route as if there’s no impact to grizzlies,” Bass says. “[They’ve] rebuffed our efforts to have discussions about where the trail could go.”

After nearly 11 weeks on the trail, Vigers and her hiking partner arrived at the Pacific Ocean, where they followed the salty shoreline north. They arrived at Cape Alava—the Western Terminus of the PNT—in September 2018 without having seen a grizzly.

Vigers feels conflicted about the controversy around the PNT. The ruggedness and isolation were what had attracted her to the trail, but she recognizes that if more people like her do the thru-hike, it will lose those qualities. She says hiking the PNT is easy to justify because as of now, so few people do it. “But that’s also probably something we just told ourselves…to feel better about it. At what point does it get to be too much for the ecosystem?”

When to Break Up with a Friend